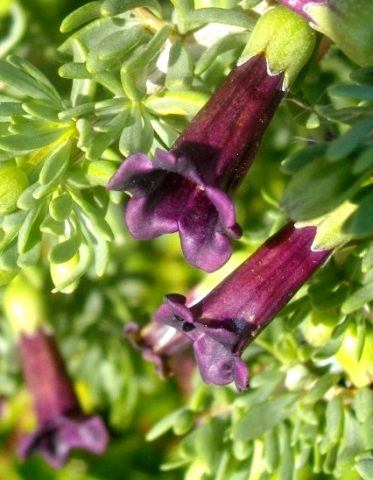 Previous
Image 2 of 37
Next

The mostly purple, sometimes mauve tinged green tube of a Lycium afrum flower widens but little to its mouth. Five short, corolla lobes spread around the mouth, their rounded tips here ending in rolled under margins. The tube is about 2 cm long, its lobes only 3 mm.

The fairly angular calyx shape during flowering becomes more rounded later when it will hold the globose fruit. The calyx appears slightly hairy upon its greenish yellow surface, different from the pale blue-grey transformation of green on the pale leaves around them.

The stamens grow from the inside wall of the corolla tube, halfway up it and quite short, about a quarter of the tube’s length. Thus the cream, globular anthers are positioned still inside the tube. Pollinators of suitable size or endowed with long snouts have to enter for obtaining their sustenance, waylaid by pollen-painting stamens.