Home » GENERA I-L » Lycium » Lycium hirsutum
Back to Category Overview
Total images in all categories: 9,600
Total number of hits on all images: 4,316,511 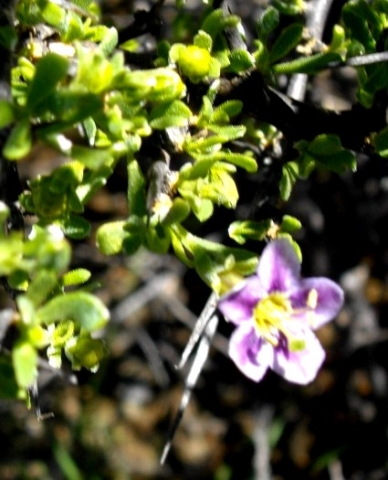 Lycium hirsutum is commonly known as the river honey-thorn and in Afrikaans the rivierkriedoring (river krie thorn or karee thorn); also wolwedoring (wolves’ thorn). It is a large, dense and thorny shrub growing curved, drooping branches reaching heights between 2 m and 3 m. The shrub is variable in appearance (SA Tree List No. 669.7).

The bark of L. hirsutum is pale brown to grey, becoming longitudinally fissured and slightly rough on old and big stems. The stems are armed with rigid spines, while the young stems are hairy.

The species is distributed widely in the west of southern Africa, the Western and Northern Cape, western Free State and North West, as well as southern Namibia and Botswana.

The habitat is arid regions, often in calcareous soils and along streambanks. The plant is not considered to be threatened in its habitat early in the twenty first century (Coates Palgrave, 2002; Shearing and Van Heerden, 2008; iSpot; www.redlist.sanbi.org).