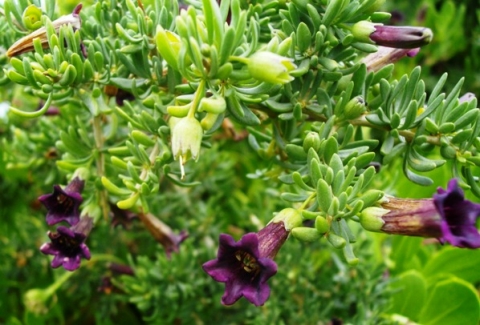 Previous
Image 1 of 37
Next

Lycium afrum is a sturdy shrub or small tree, often only 1 m tall, occasionally up to 5 m (SA Tree List No. 669,2). The leaves are small and narrow and growing in whorls.

The stiff, thorny branches are less inviting than the flowers. The flowers are purple, tubular with small petal lobes embellishing the flower mouth. The fruit is about spherical and fleshy. Initially green, it turns red, then black.

This shrub grows among rocks and on stony slopes in the drier parts of a broad Western Cape coastal belt. The species is not considered to be threatened in its habitat early in the twenty first century.

The Lycium shrubs of the Karoo are in Afrikaans generally known as kriebos or kriedoring. This species has developed the name of kriekdoring in some literature, possibly the result of finger trouble of long ago. Its Afrikaans name is probably more correctly kraalkriedoring and also bokdoring (Coates Palgrave, 2002; Manning, 2007; Manning and Goldblatt, 1996; Bond and Goldblatt, 1984; http://redlist.sanbi.org).