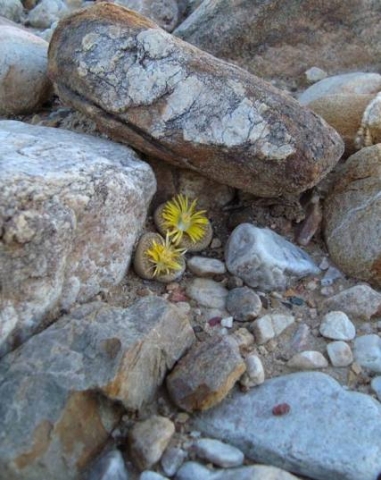 Lithops is a genus of leaf-succulent perennials, dwarf plants that grow stemless or nearly so, solitary or forming clumps.

The leaf-pairs are partly sunken in the ground on fibrous roots, joined below in cone-shaped bodies, fissured above into two flat or bulging leaf-tops. These leaf-tops are the plant parts usually seen in nature if the small plant is noticed at all among the stones on the ground. They are more admired and studied than the flowers appearing in autumn or winter. Old leaf skins persist around the new leaves as hard sheaths.

The windowed leaf-tops are variably spotted, pitted or otherwise marked in ridges, water cells or warts. Leaf-top colours vary among the species and in prevailing environmental conditions.

The fairly small flowers on short stalks grow from the leaf-slits, varying in colour from white to yellow or orange. The flower has four to seven sepals and no bracts in this genus. Numerous petals grow in one to four whorls.

Many erect stamens surround the four to nine thread-like stigmas that grow on short styles or without styles in the flower centre. The nectary is a scalloped ring in the flower base. Flowers are open only for a few hours from mid-afternoon to sunset.

The small fruit capsule has four to nine locules with covering membranes. There are expanding keels, split at the top, on the valves with broad wings. Lithops seed is very variable.

There are about 36 species with numerous subspecies and varieties.