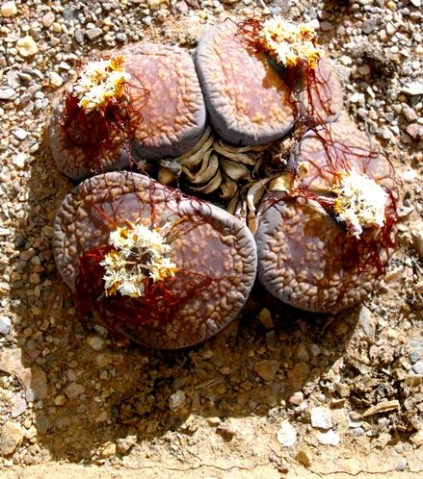 Lithops aucampiae subs. euniceae var. euniceae is a dwarf leaf succulent, about stemless, growing branched leaf-pairs partly sunken into the soil. The clumps of leaf-pairs grow slowly, reaching about 20 cm in diameter, by which time there may be about ten leaf-pairs.

The truncated upper surface of a leaf-pair is usually flat or slightly convex. The central fissure is shallow, the opposing lobes otherwise joined. The lobe margins in picture are grey to bluish grey, the rest or inner part of the upper surface reddish brown in the translucent window areas, otherwise beige and generally wrinkled as the season diminishes the plant’s succulent resources. The upper visual presentation or face of a leaf-pair becomes up to 4 cm long and 3 cm wide.

The flowers are yellow, about 3,5 cm in diameter. Lithops in general flowers in autumn to early winter, maybe this plant does the same. This photo of a cultivated plant was taken in June; signs of recent blooming still present. Also note the remains of old leaf skins in the central gap between the leaf-pairs.

L. aucampiae subsp. euniceae (the two varieties together) has a small geographical distribution in the Northern Cape near Hopetown. The plants grow in Nama Karoo and grassland flats characterised by reddish soil from fine-grained sandstone. Some evolutionary adaption of plant colour must have taken place.

This variety is considered to be vulnerable in its habitat early in the twenty first century, due to habitat degradation from dumping (Smith, et al, 1998; http://cactus-art.biz; www.redlist.sanbi.org).