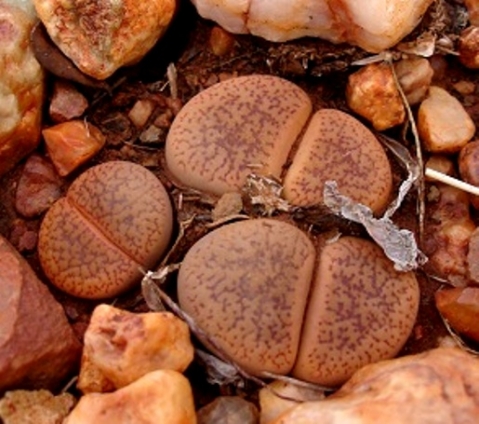 The beige to orange pink colouring on the leaf-pair tops is broken by tiny islands of scattered purple spots or ragged lines. These translucent spots and lines are windows letting in sunlight for photosynthesis to happen in cells inside the fleshy cones. They also serve as cosmetic modifications, to mimic stones for making the occasional grazer pass them by without taking a bite. Each leaf pair is fused together just below the surface. If the three cones in picture are one plant as seems likely, they will be connected via short stems below the cones into one root structure further down.

New leaves and flowers grow from the slit where new cells are shaped by the meristem which differentiates into new growth. Leaves are replaced annually; the remains of the discarded skin of last year’s leaves that had earlier enveloped the newly forming leaves protectively, now redundant and discarded (Smith, et al, 1997; Smith, et al, 1998).