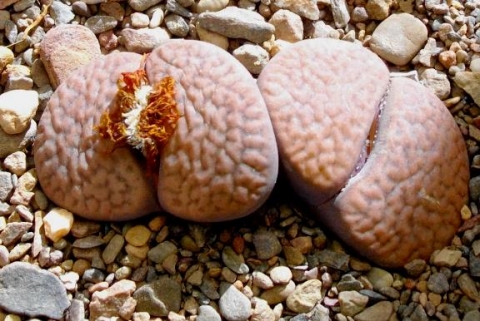 Lithops hookeri var. marginata is one of the several varieties of L. hookeri that have lost their credence as recognised distinguishable plants, plant groups or taxa; all now taken as normal guises of L. hookeri assumed to be mere intraspecies individual differences.

The lumpers thus have it for now, the splitters lying in wait, licking their wounds. Although they may have lost the short-term argument, evolution that continues as long as a species remains alive, may one day bring their distant splitter offspring a victory again. This will happen once living conditions have caused these plants to adapt further into yet greater diversity.

All of this is based on the presumption that there will be scientists by that time, capable, willing and motivated to perform such work. For human behaviour and thinking also evolve, the species being alive and adventurous.

And, of course, on the possibility by some Lamarckian miracle that the offspring of splitters will retain their convictions over generations; or new ones are grown. This rarely happens, for children only persevere in the convictions of their fathers when thinking is low.

This Lithops grows solitary leaf-pairs or clumps into groups of two or more. The upper surface of a leaf-pair is rusty brown, the windows olive-green, the surface wrinkled. In all of that expect much variability. The two lobes are about elliptic and nearly equal in each pair.

A small yellow flower grows from the fissure in the leaf-pair. It opens late afternoon, closing by dusk. All-comer insects contribute to the pollination. If you want to know which insects are involved, go camping for sundowners for a few weeks next to these plants and write a Masters in Botany, Entomology or Ecology. Let the professor pay for drinks; not the kind that would impair observational skills. Flowering takes place in mid-autumn.

The species distribution is in the Northern Cape southeast of Hopetown. The plants grow in varied quartzitic or shale soils. Exposed among the gravel these plants are difficult to spot. The species is not considered to be threatened in its habitat early in the twenty first century.

Most Lithops plants are popular and conserved ex situ, cultivated successfully in many countries according to locally tried and tested methods suitable for their conditions. There is value in this, but not at the level of the ecological interaction that sustains the natural biodiversity on earth. Pockets of complex laboratory conditions can be simulated for ecological experiments, but nature itself needs to be conserved (Smith, et al, 1998; http://llifle.com; www.redlist.sanbi.org).