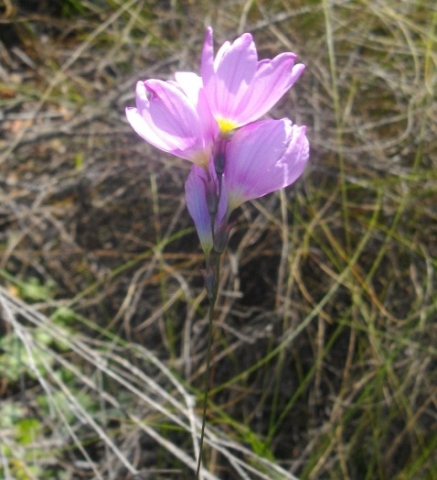 Previous
Image 8 of 27
Next

Ixia polystachya, the African corn lily or in Afrikaans the koringblommetjie (little wheat flower), is a cormous perennial. The plants are quite variable in leaf width, density and size of the inflorescence.

The species distribution is in the southwest of the Western Cape from Clanwilliam to the Cape Peninsula and eastwards to Caledon.

The habitat is renosterveld and fynbos on sandstone and granite-based stony slopes and flats. The plants do well in moist, shaded places. Although the distribution is reduced by development, the species is not considered to be threatened in its habitat early in the twenty first century.

As a garden escape in Australia, this plant causes problems as a weed (Manning, 2009; www.pacificbulbsociety.org; http://florabase.dec.wa.gov.au; http://redlist.sanbi.org).