Home » GENERA I-L » Ixia » Ixia polystachya blue-white with brown centre
Back to Category Overview
Total images in all categories: 10,212
Total number of hits on all images: 4,867,412 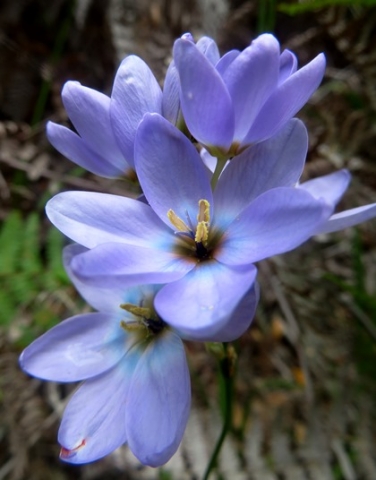 Previous
Image 9 of 27
Next

Ixia polystachya flowers are borne in a compact to lax spike, the flowers spirally arranged. They may be pink, mauve, blue or white, even yellow. The corolla centres may be dark in one of several colours or unmarked, conforming to the same colour as the other tepal parts.

In picture, the nearly white, partly pale blue tepals are brown at the base, the colouring visible inside and outside the corolla.

The nearly oblong and bilobed anthers, exserted like the style above the tube, are pale yellow to creamy here, abundant quantities of pollen still present.