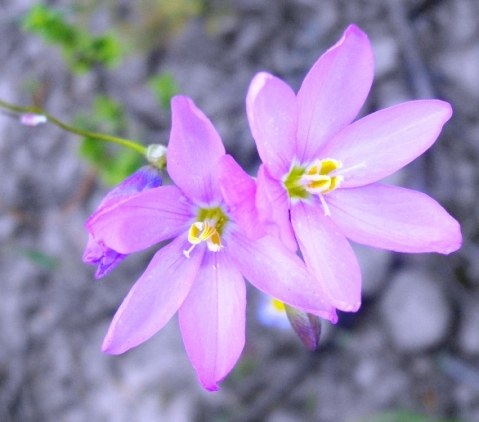 Previous
Image 7 of 27
Next

Ixia micrandra is a cormous geophyte with wiry stems, growing to heights varying between 20 cm and 60 cm. Two or three narrow, nearly cylindrical leaves become half as long as the flower stem.

The flowers grow in a short, compact spike. Two membranous bracts, toothed at their tips, are found below each flower. The flower has a narrow tube of about 5 mm in length. The six pink tepals are elliptic, sometimes with dark longitudinal veins visible, as in the flowers in picture. The corolla throat is green, fringed with white. White or mauve flowers may also be found. Flowers open to a diameter of 2,5 cm. The yellow anthers are erect in the flower centre, short, broad and curving inwards at the tips, while their white ridged sides curve backwards. Three thin white stigma branches protrude from among the anthers. Blooming happens late winter and early spring.

Ixia micrandra occurs on rocky sandstone slopes and flats in the southwestern Cape, inland as far as the Swartberg Mountains. This one was photographed in September in the De Hoop Nature Reserve on the southern Cape coast (Manning, 2007; Vlok and Schutte-Vlok, 2010).