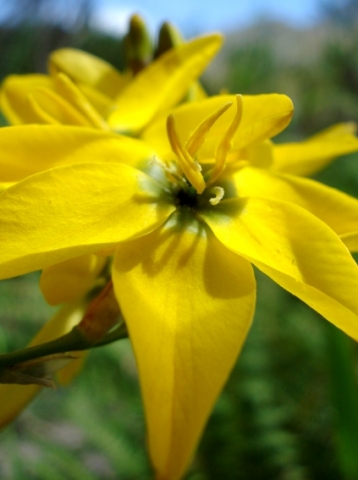 Previous
Image 3 of 27
Next

This radially symmetric Ixia dubia flower displays three long, thin anthers conspicuously in its centre. They are curving and channelled, taller than the three stigma branches. The short filaments not visible in this photo are usually black or partly so.

Flowering occurs from midspring to midsummer.

The species is found in the Western Cape from the Cape Peninsula to Piketberg in the north and Caledon in the east. Its habitat is sandstone and granite flats and slopes. This one was seen in the Kogelberg early in November (Bean and John, 2005; Manning, 2007).