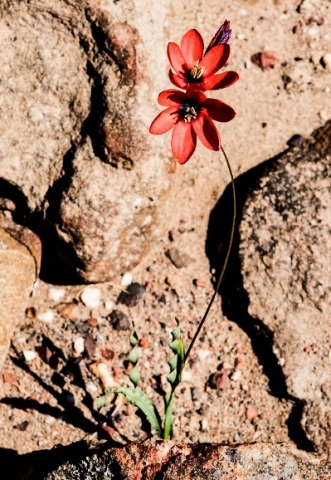 Ixia campanulata, the red ixia or in Afrikaans rooikalossie (red skull cap or historical, local headdress), is a cormous perennial growing a slender, wiry stem to heights from 10 cm to 35 cm. The inflorescence and leaves grow annually from a globose corm in a fibrous tunic slightly bigger than 1 cm in diameter.

The leaves are sword-shaped to strap-shaped, in picture twisted spirally in their upper parts. There are usually three or four of them and they are much shorter than the erect inflorescence.

The species is distributed from Tulbagh to Worcester and Robertson, mainly associated with the Breede River valley. The photo was taken seven km north of Greyton near the Riviersonderend Mountains where about twenty plants were seen.

Although a Western Cape endemic, iNaturalist shows recordings of the species on the Scilly Islands and in New Zealand. There are surely more export destinations of these pretty flowers, the global village haphazardly accepting foreign plants like foreign people, sometimes with regret to follow.

The habitat of I. campanulata is lower sandstone slopes and alluvial sandy flats in semi-arid conditions. The plant grows among dry fynbos, possibly also in renosterveld.

The plant is regarded as critically endangered early in the twenty first century. More than half of the small distribution of this species has lost its natural habitat or suffered degradation due to farming, too frequent fires and alien plant invasion. The plant population is decreasing and fragmented (Bond and Goldblatt, 1984; JSTOR; iNaturalist; http://redlist.sanbi.org).