Home » GENERA G-H » Holothrix » Holothrix randii emerging in burnt veld
Back to Category Overview
Total images in all categories: 11,036
Total number of hits on all images: 5,686,035 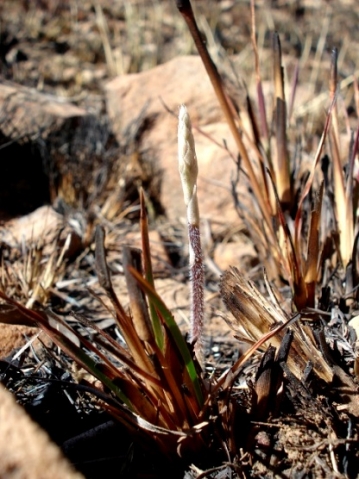 The erect flowering stalk of Holothrix randii seen here in August appears quite sturdy. It has recently grown from its underground tuber after a winter grass fire. The burnt leafy tuft in front of the young stalk belongs to a different plant. The remains of the withered H. randii leaf may be present where it had grown flat on the ground before the stalk, but is unsighted in this photo. Having dried out before the appearance of the stalk, it may also have met with destruction by fire.

The flower stalk, growing unscathed with the early season's rise in temperature, shows a purple colour. Scattered, whitish hairs are visible along its surface.

The top part of the stalk is covered by beige bracts, pointed and triangular in shape, clasping the stem. They will soon develop bulges as the buds of flowers form under them (iSpot; Van Wyk and Malan, 1997; Lowrey and Wright, 1987).