Home » GENERA G-H » Holothrix » Holothrix leaves
Back to Category Overview
Total images in all categories: 8,952
Total number of hits on all images: 3,966,690 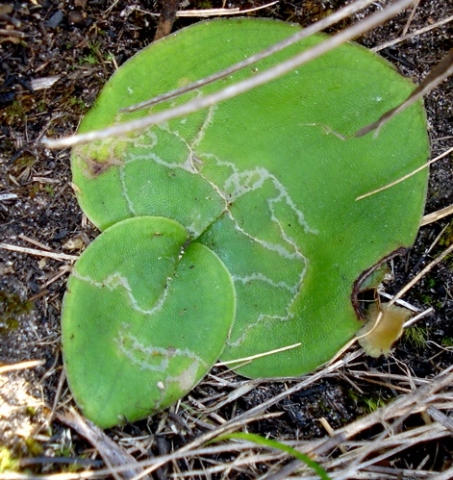 These leaves seen during October in Bainskloof are probably those of a Holothrix plant. There were no flowering specimens to be found in the vicinity, so the species wasn’t identified. Leaf shape does not rule out H. burchellii, H. longicornu or several other species.

Some Holothrix plants may bear only one leaf, grown annually with stalk and flowers from their perennial tubers. The leaf base on the ground clasps the erect flowering stem, or in the case of two leaves being present, the stem emerges from between the two leaves.

The deciduous Holothrix leaves may already be withered by the time a flower stalk emerges. The upper layer of the leaf, the epidermis that stores water, sometimes appears translucent. When two leaves are present pressed to the ground, they are positioned opposite each other, the one usually large, the other small.

Holos (Greek) means whole, thrix (also Greek) means a hair. The hairy stems and leaves deservedly give the Holothrix genus its name. Especially the under-surfaces of the leaves are generally hairy (Liltved and Johnson, 2012; www.plantzafrica.com).