Home » GENERA G-H » Holothrix » Holothrix scopularia
Back to Category Overview
Total images in all categories: 10,169
Total number of hits on all images: 4,831,529 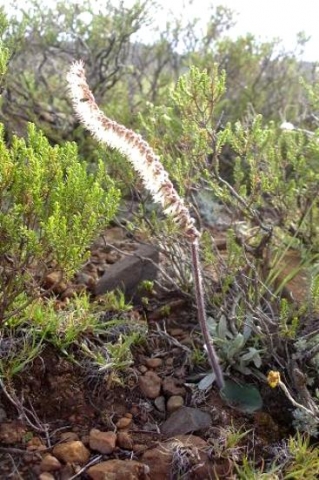 Holothrix scopularia is a tuberous geophyte, meaning that it grows above-ground leaves and a scape, annually renewable from the underground part, the ovoid perennial tuber. Commonly these plants are referred to as ground orchids. There are usually two fleshy leaves, rounded and unequal, positioned flat on the ground. The stout and hairy scape or flower stalk may exceed 30 cm in height.

The species habitat is exposed grassland, commonly in rocky patches at medium to high elevations in and near the Drakensberg from the Eastern Cape to Mpumalanga, as well as in Lesotho. This photo was taken in the Mkhomazi Wilderness Area in the Drakensberg region of KwaZulu-Natal (Pooley, 1998; JSTOR; www.pacificbulbsociety.org).