Home » GENERA G-H » Holothrix » Holothrix randii flowers
Back to Category Overview
Total images in all categories: 8,965
Total number of hits on all images: 3,975,984 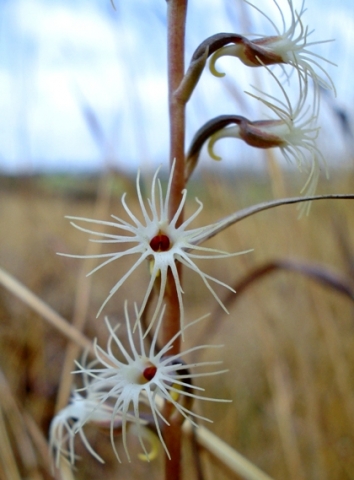 The frontal view of a Holothrix randii flower allows a peep at its maroon anther, part of the flower column inside the perianth. The lip and petal bases form a short tube or cup at the flower base around this column.

Above it there is the great unravelling of the white petal tissue into numerous thin lobes that will crook a finger and wave about in every wind, beckoning to pollinators for free entry. A short, sheathing bract ending in an acute tip firmly holds the base of each flower.

Although part of the distribution of the plant is on the Witwatersrand, the specific name is said to have been derived from the name of Isaac Rand, a London apothecary, who was director of the Chelsea Physic Garden in the eighteenth century. This London Garden, established in 1673 as the Apothecaries' Garden and open to the public since 1983, houses about 5000 plant species of interest in human application. Only the University of Oxford Botanical Garden (1621) is older in the UK (Germishuizen and Fabian, 1982; Wikipedia).