Home » GENERA G-H » Habenaria » Habenaria barbertoni
Back to Category Overview
Total images in all categories: 9,754
Total number of hits on all images: 4,379,190 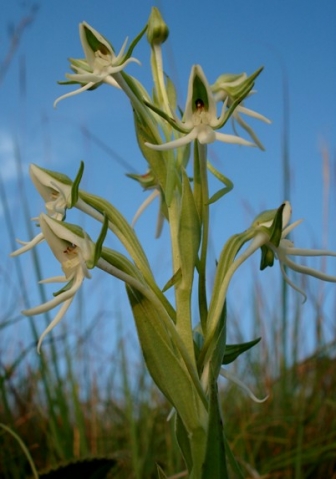 Previous
Image 5 of 95
Next

Habenaria barbertoni is a terrestrial orchid, a deciduous perennial growing from a large, hairy, ovoid tuber and hairy roots. The plants are small, about 25 cm tall and sometimes slender.

This is one of the Habenaria species living up to its generic name, meaning thong-like or rein-like; habena being a thong or rein in Latin. The likeness that led to the name occurs both in some elongated perianth segments and, in this case, especially the very long spur below.

The Habenaria genus is represented worldwide by about 600 species in tropical and subtropical regions, making it one of the largest orchid genera.

H. barbertoni is endemic to South Africa, distributed in Gauteng and Mpumalanga, where it received the barbertoni specific name because it (also) grows in rocky grassland hillsides near Barberton.

The species is considered to be near threatened in its habitat early in the twenty first century, from habitat destruction due to the high density of human land occupation (Lowrey and Wright, 1987; Germishuizen and Fabian, 1982; JSTOR; www.redlist.sanbi.org).