Home » GENERA G-H » Habenaria » Habenaria arenaria
Back to Category Overview
Total images in all categories: 9,754
Total number of hits on all images: 4,379,190 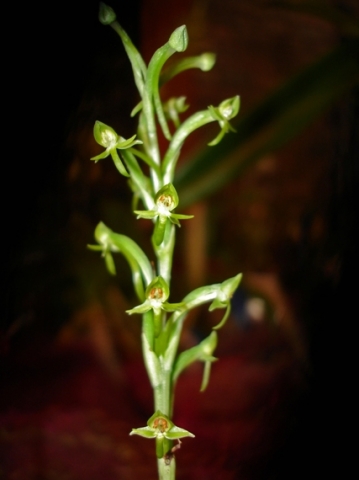 Previous
Image 3 of 95
Next

Habenaria arenaria, the dune orchid, is a slender perennial, a ground orchid reaching heights to 40 cm.

Two (occasionally three) leaves grow at the stem base and smaller ones grade up the flower stem into the floral bracts of the inflorescence. The basal leaves, elliptic with acute tips, are sometimes mottled grey early on, becoming 15 cm long and 4 cm wide.

The species is distributed from the southern Cape as far west as Riversdale, the Eastern Province where it is most common, through KwaZulu-Natal to Mpumalanga, southern Mozambique and Swaziland.

The habitat is inland forest and thicket from the coast to 1500 m. Arena (Latin) meaning sand and arenarius (or arenaria) meaning pertaining to a sandy place, give hints as to the soil in which this plant grows. The species is not considered to be threatened in its habitat early in the twenty first century (Liltved and Johnson, 2012; Pooley, 1998; www.redlist.sanbi.org).