Home » GENERA G-H » Habenaria » Habenaria cornuta
Back to Category Overview
Total images in all categories: 9,769
Total number of hits on all images: 4,390,200 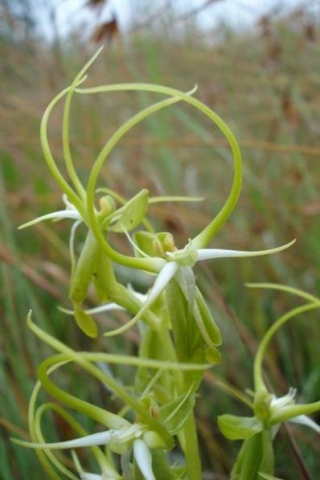 Habenaria cornuta is a slender to robust perennial that grows to about 50 cm from ovoid to globose tubers with hairy roots. The gracefully curved sepals are green; the shorter lip lobes white.

The South African distribution of the plant lies in the eastern parts of the country from the Eastern Cape to Limpopo and as far west as the Free State and Gauteng. Across Africa the plant is widespead, from Zimbabwe to Ivory Coast and Ethiopia.

The habitat is moist grassland, often marshy bog or wetland and some forests at elevations between 900 m and 2100 m. The species is not considered to be threatened in its habitat early in the twenty first century.

The genus Habenaria is the largest of the terrestrial orchids, containing about 800 species, 35 of which occur in South Africa (Pooley, 1998; www.redlist.sanbi.org).