Home » GENERA G-H » Habenaria » Habenaria clavata flower
Back to Category Overview
Total images in all categories: 9,754
Total number of hits on all images: 4,379,173 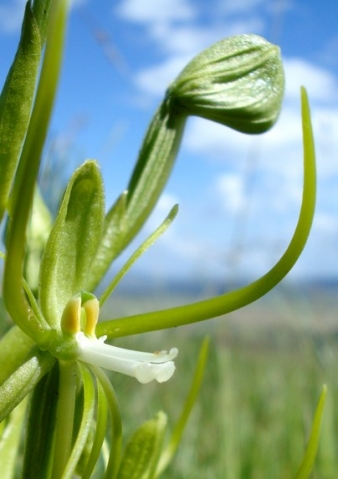 Habenaria clavata flowers are green, only some of the central column parts being white.

The narrowly pointed dorsal sepal forms a hood above the flower centre, flanked by the thread-like upper petal lobes that adhere to its margins. The lateral sepals are deflexed, up to 1,9 cm long and rolled lengthwise. The longer, lower petal lobes are cylindrical, curving outwards and up.

The stigma protrudes horizontally and separated from other column parts, flanked by the also white rostellum arms. The lip has three long, thin lobes, the central one the longest.

The spur growing downwards from the back of the lip is up to 5 cm long, borne parallel to the ovary and pedicel. The tip of the spur bulges, giving cause for the specific name of clavata (Latin), meaning club-shaped.