Home » GENERA G-H » Habenaria » Habenaria arenaria flowers
Back to Category Overview
Total images in all categories: 9,754
Total number of hits on all images: 4,379,146 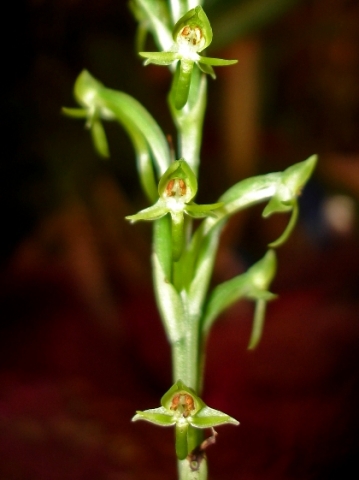 Previous
Image 4 of 95
Next

The small green flowers of Habenaria arenaria grow, from few to many of them, in a lax raceme. They are thought to be unscented. Acutely pointed, lance-shaped bracts, up to 1,8 cm long, are found below each flower pedicel. This pedicel becomes up to 8 mm long, the ovary in its upper end curved, slightly longer than 1 cm.

The lip has three lobes. The lateral ones spread sideways, the midlobe, narrowly oblong and green, protrudes slightly forward and strongly downwards. A nectar-producing spur of 1,5 cm grows below the back end of the lip. It becomes much longer than the lip, up to 2 cm long. The spur has a tooth upon its surface and is slightly inflated near its tip that tapers.

Flowering happens in two phases, from mid-spring to early summer, then again in mid-autumn to midwinter (Liltved and Johnson, 2012; Pooley, 1998).