Home » GENERA G-H » Habenaria » Habenaria clavata
Back to Category Overview
Total images in all categories: 9,754
Total number of hits on all images: 4,379,159 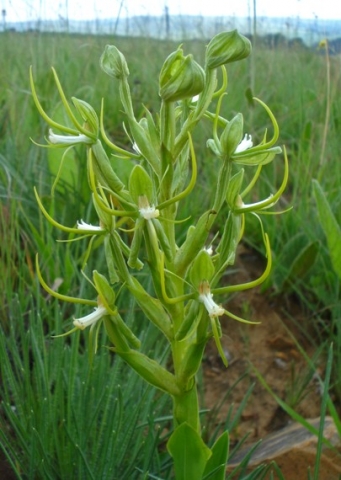 Habenaria clavata, in Sesotho commonly known as mametsana (mother of the water), is a terrestrial orchid, a slender to robust perennial reaching heights around 70 cm.

Growing from a fleshy tuber, the about 13 leaves all sheathe the stem, spiralling up it and grading into the bracts subtending the flowers. The leaves become about 11 cm long and 3 cm wide. They are elliptic to lanceolate in shape, attenuating to acute tips.

The species is distributed over the eastern parts of South Africa, from the Eastern Cape across the Free State and KwaZulu-Natal to Gauteng, Mpumalanga and Limpopo. It also grows in neighbouring countries in tropical Africa as far as Nigeria and Ethiopia.

The habitat is well-drained grassland, sometimes in swampy areas, but also in some dry forests at elevations from 600 m to 1950 m. The species is not considered to be threatened in its habitat early in the twenty first century (Pooley, 1998; Lowrey and Wright, 1987; www.zimbabweflora.co.zw; www.redlist.sanbi.org).