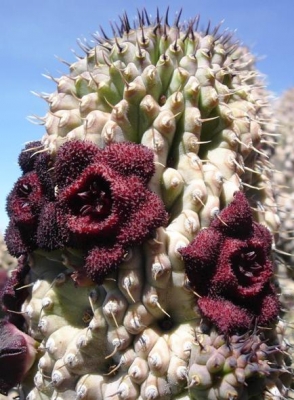 Hoodia pilifera subsp. annulata is one of the less known, but equally beautiful hoodias. It is adjusted to thrive in an arid, even semi-desert environment. It grows in nature in the Eastern Cape Karoo, particularly the Willowmore area.

The plant branches low down to form a clump of thick stems similarly to other Hoodia species. The maroon flowers have a notable ring or annulus around the small central corona. The tiny papillae, fleshy protuberances with the same colour as the rest of the corolla scattered densely on the corolla surface add to the allure of the flowers. This plant is said to be the biggest of South African Hoodia species.