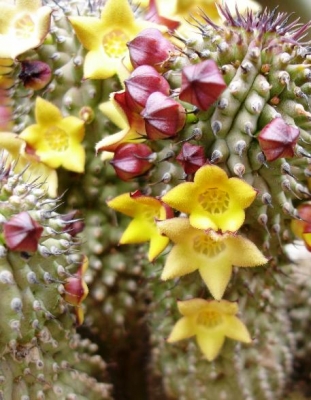 The spring flowers are yellow, the buds a pale maroon, growing on short peduncles. Five corolla tips spread into a star-shape is a flower form repeatedly found in many delightful variations in this genus and others within the larger family, the Apocynaceae. Tiny spines can be seen growing from the tips of the stem tubercles, red when young, later drying out to a pale grey.

The plant grows in the Karoo in a limited area between Matjiesfontein, Laingsburg, Merweville and south to Calitzdorp. The habitat is varied scrubveld in clay soils on stony slopes. The species is not considered to be threatened in its habitat early in the twenty first century.

Several Hoodia species from the arid South African inland have been used in making pharmaceutical products for appetite suppression or slimming. Until clarity on the future of these ventures is achieved, a plant like this may just be admired for its beauty and not used in agricultural cultivation. Different Hoodia species have been planted extensively in recent times, although the commercial craze seems to have died down (Vlok and Schutte-Vlok, 2010; www.redlist.sanbi.org).