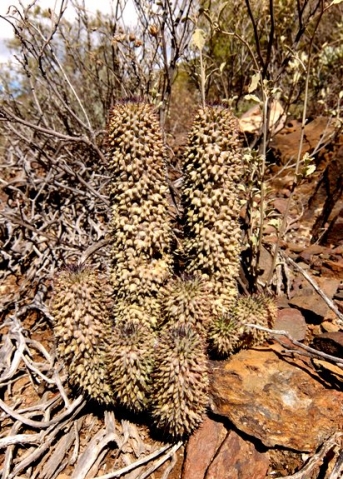 Hoodia and several other kinds of flowers are pollinated by flies. This phenomenon of flies rather than bees and butterflies providing the services, accompanied by appropriately modified flower odours to accommodate pollinator predilections is called myophily; muia meaning fly in Greek, philos meaning loving.

Science creates terms to enhance clarity and precision of description. Knowledge grows by reducing ambiguity, while people grow deeper understanding by mastering the terms of their fields of interest. That is why the recurring funny or strange words of science are worth checking out when a field like flowering plants becomes an interest.

H. pilifera subsp. pilifera is a Western Cape endemic found in the Little Karoo from Montagu to Uniondale and north of the Swartberg Mountains in southern parts of the Great Karoo from Laingsburg to Klaarstroom.

The plant grows mostly on north-facing shale and lower sandstone slopes at elevations between 300 m and 900 m. The subspecies is considered to be near threatened in its habitat early in the twenty first century due to overgrazing and harvesting by local people as food and an ingredient of medicine (Vlok and Schutte-Vlok, 2010; iSpot; www.cactus-art.biz; www.redlist.sanbi.org).