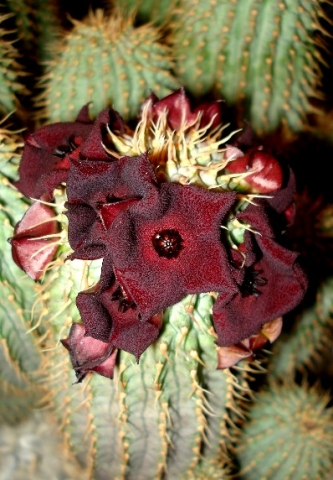 Soft-textured and velvety, the maroon surfaces of the shallowly lobed flowers of Hoodia pilifera subsp. annulata spread close to the spiny surface of the tubercle-studded stem tip where they perch.

The corolla surface is densely covered in conical papillae. The flowers are close together, even overlapping each other. The outside surfaces of the still closed buds in picture show the paler, smoother and shinier outer surfaces of the corollas.

This subspecies is distinguished by its very prominent, raised annulus at the centre of the foul-smelling, dark-maroon flowers.

The subspecies is not considered to be threatened in its habitat early in the twenty first century (iSpot; www.redlist.sanbi.org).