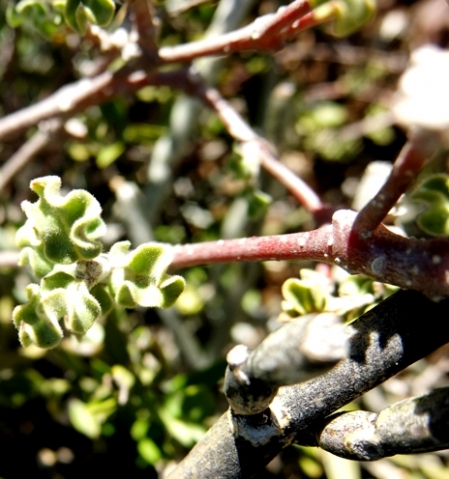 Fockea capensis, since olden times known in the vernacular as kambro, is a shrub growing twining stems to about 1 m. It grows from a large, sometimes warty and sometimes underground tuber. The thin grey or brown upper stems are hairy and twine; the lower ones stubby, much branched and hairless.

The genus belongs in the Apocynaceae family, commonly known as the milkweed or dogbane family, notable for their milky latex. F. capensis, previously known as F. crispa, was first described by Carl Thunberg in 1794, some say by Stephan Endlicher in 1839.

There are six species of Fockea or water-roots in southern and eastern Africa. Their large tubers were much used by indigenous people, particularly the Khoi, as sources of drink and food, sometimes roasted. Jam has been made from some Fockea caudices.

F. capensis is a Little Karoo endemic that grows in clay soils among rocks where guarri or spekboom are commonly seen. The species has stable populations in habitat, not considered threatened early in the twenty first century (Vlok and Schutte-Vlok, 2010; iSpot; www.redlist.sanbi.org; www.succulent-plant.com).