Home » GENERA E-F » Fockea » Fockea capensis flower
Back to Category Overview
Total images in all categories: 11,792
Total number of hits on all images: 6,949,340 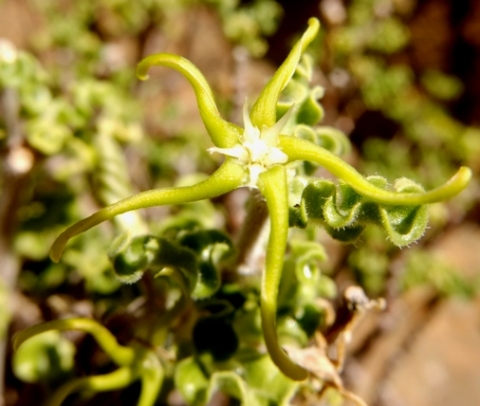 The writhing twist in the lime-green corolla lobes make the Fockea capensis flower. Like a free-moving organic star, the limb elegance suggests an extra-terrestrial origin; if not from the sea. Maybe this one could be at home under an unknown star, on a planet yet to be discovered, far away from earth.

What appears like spin in these lobes is not repeated in the short, white inner lobes, the corona that follows a more conventional style recognised in earth flowers.

Apocynaceae floral structures often have corolla lobes overlapping to the right or left with one or two layers of (smaller) corona lobes on top of the outer corolla or on the column of the stamens.

Fockea flower coronas are cylindrical tubes around the gynostegium, a specialized cap-like mass of tissue covering the gynoecium, the pistil or female flower parts borne centrally.

Apocynaceae is a complex family comprising five large subfamilies, all with typical, but related floral structures diversified into 480 genera and 4800 species.

Much living on earth has been going on, before humanity started looking around (Vlok and Schutte-Vlok, 2010; Leistner, (Ed.), 2000).