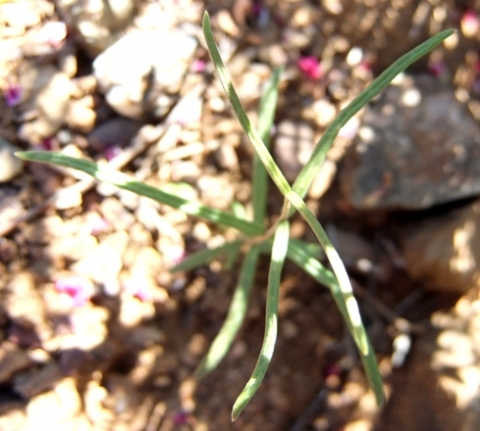 Fockea comaru, one of the kambro species that grow large caudices and has milky sap, is a shrub producing thin stems that sprawl or twine. The tuber consisting of spongy, water retaining fibres is sometimes turnip-shaped, otherwise irregular in shape, possibly formed by the stones around it. This caudex may be situated some distance away from where the stem emerges from the ground.

The leaves are opposite and narrow with margins that are rolled under and the midrib recessed. The leaves become 2 cm long and 1 mm to 2 mm wide. The leaf tapers to a pointed tip.

The inflorescence consists of two to six nearly sessile or stalkless flowers. The flower has five, narrowly lance-shaped, hairy sepals. The five yellow-green, brown-green or brown corolla lobes are narrow on a bell-shaped corolla tube. Inside it resides a white corona comprising reflexed outer lobes and tiny inner ones. Flowering happens in spring and summer.

The species is distributed from Namibia and Namaqualand across the Karoo and Little Karoo to Willowmore in rocky or sandy places. The species is not considered to be threatened in its habitat early in the twenty first century.

The plant is popular among succulent growers who tend to leave more caudex above-ground than seen in nature (Bond and Goldblatt, 1984; iSpot; www.llifle.com; http://redlist.sanbi.org).