Home » GENERA E-F » Fockea » Fockea comaru leaves
Back to Category Overview
Total images in all categories: 11,792
Total number of hits on all images: 6,949,228 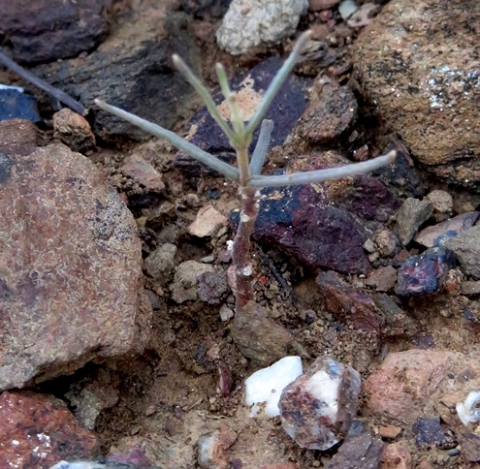 Previous
Image 8 of 12
Next

This small stem of Fockea comaru, one of the geophytic plants bearing edible tubers known as kambro, was seen at Minwater near Oudtshoorn during January.

The leaves, blue-grey in the plant in picture, have blunt tips and margins rolled under. The stem is dull maroon in its older part, thickish and sturdy for such small growth. Being deciduous, the annual growth hasn’t done much in six months.

The size of the subterranean tuber is hard to guess, from 10 cm to 25 cm in diameter in a mature plant. After some years of drought in the Little Karoo even an old plant with big rootstock may not have had much to offer aboveground this year. The tuber, rootstock or caudex is pale yellow-brown and fairly smooth with some scattered, superficial rough spots on the skin.

Kambro tubers have been eaten raw or cooked by local people since times immemorial, starting with the San who knew them as sources of moisture, important in thirsty times. Some of the other Fockea species produce bigger tubers, particularly to the north in the Great Karoo and the Kalahari. In some areas they are still commonly eaten, now as a foodstuff rather than as a source of moisture.

The continued practice of using F. comaru these days is for cooking jam, more as a curiosity, as the rarely seen plants are increasingly deemed worthy of conservation (Van Jaarsveld, et al, 2006; Van Wyk and Gericke, 2000; Bond and Goldblatt, 1984; iNaturalist; www.llifle.com).