Home » GENERA E-F » Fockea » Fockea capensis caudex
Back to Category Overview
Total images in all categories: 11,792
Total number of hits on all images: 6,949,350 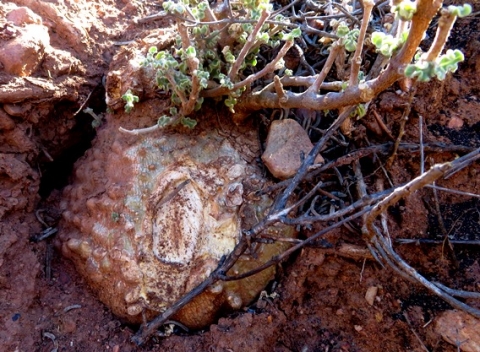 Previous
Image 2 of 12
Next

The exposed caudex or tuber of Fockea capensis gives an idea that these storage rootstocks become large (and old). The one in picture is nothing yet though, compared to the 60 cm diameter it may achieve. That possibly happens only after a century or two, if you can wait.

Sometimes partly above-ground, this caudex would have been hidden from sight if someone (or something) hadn’t uncovered it for all to see. The surface of the largely globose body is greenish and knobbly. It is possible that the green was added since it became exposed to sunlight and that the covered side may be whitish.

This food resource meant to sustain the plant, especially during dry seasons and when flowers and seed are produced. It has, however, for long been shared (without its consent) by many animals as well as people.

The noted longevity of the F. capensis species is probably related to this asset of mass storage. Biblical accounts of human dependence upon storage of large reserves of grain by the strong nations of yore, like the Egyptians at that time, affirms this advantage in a different context.

The times of human cannibalism are (mostly?) in the past. Modern preferences appear to be changing, as many move away from meat as a food source for a variety of reasons. This puts the burden of feeding humanity (and all the herbivores) fully upon plants. (What else is there to eat, after all!)

Nobody thinks much of plant rights today, although diverse theories, cult movements, sentiments and experiments regarding plant awareness and behaviour hover over several horizons.

Curiously, the question of people not eating meat might reduce the animal numbers on earth even faster than up to now. The focus will be on the large numbers of domestic animal species on farms and feedlots, rather than on the ongoing marginalisation of wild mammal, amphibian, reptile, fish and bird species on earth.

However all of that pans out, the sheer volume of food consumed by 7 billion people, going on many more and fast, is vast and increasing; unless famine is rediscovered, which seems possible (Vlok and Schutte-Vlok, 2010; www.bihrmann.com; www.llifle.com).