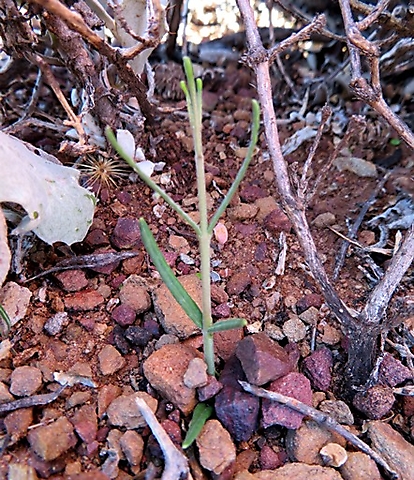 The long, narrow, fleshy leaves grow in opposite pairs at right angles to the previous pair (or decussate). They are mostly sinuate or wavy or become so, as the specific name indicates. The leaves may become grey, brown or purplish, the midrib straight and whitish, up to about 35 mm long and 3 mm wide.

The flowers are small, green to brown with bell-shaped tubes and short, thread-like lobes. The plants flower in spring and summer.

The species distribution is widespread in the southwest of South Africa, in the Northern Cape, the Western Cape, the Eastern Cape and the Free State; also found in Namibia. This young stem was seen in the Little Karoo near Oudtshoorn during May without signs of wavy leaf margins (yet).

The habitat is stony slopes in semi-arid regions, the plants growing in partial shade of rocks or shrubs in different soils. The species is not considered to be threatened in its habitat early in the twenty first century (Leistner, (Ed.), 2000; iNaturalist; https://succulentsnetwork.com; https://worldofsucculents.com; http://redlist.sanbi.org).