Home » GENERA D-F » Eucomis » Eucomis bicolor
Back to Category Overview
Total images in all categories: 9,410
Total number of hits on all images: 4,229,344 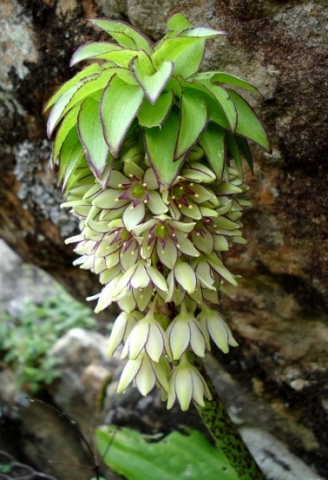 Previous
Image 3 of 14
Next

This Eucomis bicolor raceme of flowers in their prime was found in the Mkhomazi Wilderness Area of the KwaZulu-Natal Drakensberg in January. The crown of pointed, leafy bracts at the top of the flowers has purple, finely serrated margins.

The upper flowers display their tapering, purple filaments topped with tiny yellow anthers as a secondary star within that formed by the six purple-margined tepals. The green, ovoid ovary in the flower centre has a short style. Flowers lower down are nodding, showing just the outer surfaces of the tepals, the small sepals and the pedicels, all cream coloured. Scattered purple spots can be seen on the green scape below.

The inflorescence of this species may stand up to 60 cm tall. The plant grows in Drakensberg grassland in places where it is usually damp (Manning, 2009; iSpot).