Home » GENERA D-F » Eucomis » Eucomis montana flower
Back to Category Overview
Total images in all categories: 9,597
Total number of hits on all images: 4,315,447 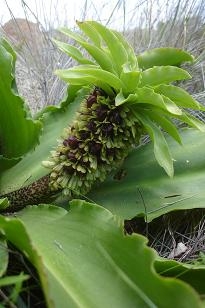 The broad leaves that grow in a basal rosette, sometimes with wavy margins, is common in the Eucomis genus. Eucomis montana has wavy leaves here, but some specimens display more erect leaves with straight margins, usually purple spotted on their lower surfaces.

Some of the 10 Eucomis species also share the purple or maroon spots seen on this scape, the flower stalk. The name Eucomis comes from the Greek, eu meaning pleasing and komis being hair of the head. Eucomis plants grow annually from perennial ovoid bulbs covered in hard tunics.

The tuft of bracts at the top of the densely flowering raceme is large in this E. montana plant, but also that feature is not unique to the species. What is distinctive of E. montana, is the colour contrast between pale tepals and purple stamens. While the tepals are pale lemon green to creamy, the dark maroon colour appearing inside the individual flowers, is given to it by the ring of large dark anthers and also the carpel, the style and ovary. The flowers are foetid, which helps to attract various fly species, the important pollinators. Flowering arrives by midsummer for a short blooming season.

E. montana plants grow to 30 cm, are seen in summer rainfall grassland of the Highveld and the mountains of the escarpment in Mpumalanga, the Free State and Swaziland (Germishuizen and Fabian, 1982; Wikipedia).