Home » GENERA D-F » Eucomis » Eucomis schijffii
Back to Category Overview
Total images in all categories: 9,387
Total number of hits on all images: 4,216,793 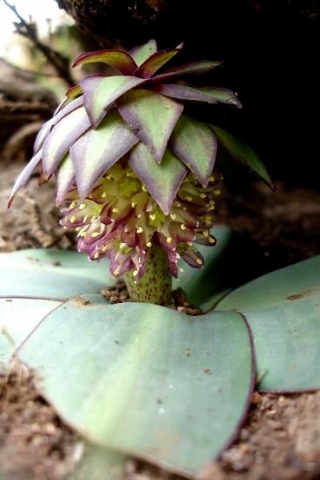 Previous
Image 9 of 14
Next

Much more green appears on the bracts at the top of this Eucomis schijffii inflorescence than in the other photos of the plant posted in this Album. Only the margins are maroon, while the tepals that are visible on the small flowers also appear more pale green. A part of the sturdy scape below the flowers is visible in the picture, showing scattered purple spots of variable shape and size on the pale green surface. The foetid flowers of E. schijffii are pollinated by flies of various kinds, as is the case with Eucomis in general.

The broad prostrate leaves at the base of the plant have red margins. On some plants the three to five leaves it normally grows annually, may be quite a bit narrower.

The plant is a protected species in South Africa, which seems to work, as there is no concern over population decrease of the species early in the 21st century. The photo was taken in January at Mokhotlong in Lesotho (iSpot; www.plantzafrica.com).