Home » GENERA D-F » Eucomis » Eucomis montana
Back to Category Overview
Total images in all categories: 9,387
Total number of hits on all images: 4,216,803 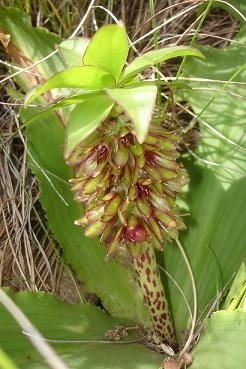 Previous
Image 6 of 14
Next

Eucomis montana is one of the sought after pineapple lily garden plants. The unusual, erect raceme of densely positioned six-tepalled star-like flowers, crowned by its characteristic tuft of leafy bracts, establishes the pineapple link of the common name.

The ten species of the Eucomis genus all grow in South Africa. Some of them are also more widely distributed in tropical Africa.

Eucomis forms part of the Hyacinthaceae family. In the past it used to be classified under Asparagaceae.