Home » GENERA D-F » Eucomis » Eucomis species
Back to Category Overview
Total images in all categories: 9,597
Total number of hits on all images: 4,315,450 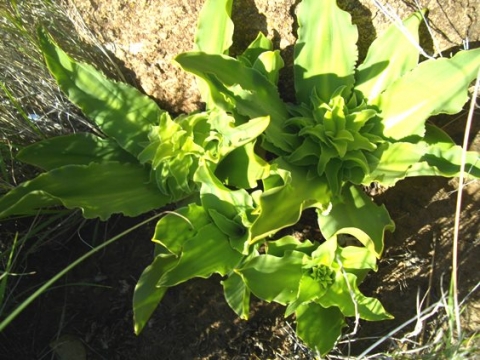 This group of Eucomis plants was seen in Meiringspoort in January, living comfortably among grass and rocks.

Eucomis is not commonly seen in the Little Karoo. This looks like Eucomis autumnalis, which is supposed to be found further to the east in the Western Province around Knysna (across the mountains to the south) and in the Eastern Province.

To the west one gets E. regia from Namaqualand southwards, but probably not further east than the renosterveld around Robertson. It has broad and straight leaves without marginal undulations, usually spread flat on the ground.

Most of the 11 Eucomis species are found in the east of South Africa. At least E. zambesiaca also occurs beyond the border in some neighbouring countries (Manning, 2007; Bond and Goldblatt, 1984; iSpot; www.redlist.sanbi.org).