Home » GENERA D-F » Eucomis » Eucomis autumnalis
Back to Category Overview
Total images in all categories: 9,410
Total number of hits on all images: 4,229,401 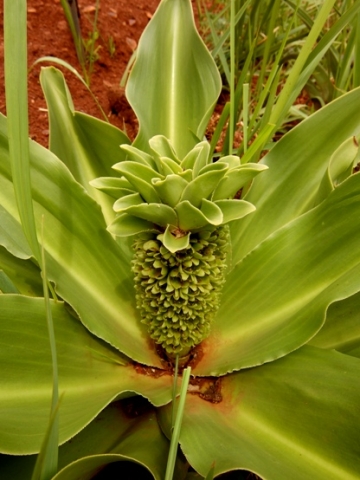 Eucomis autumnalis, the common pineapple lily, is a bulbous perennial growing annual leaves and a flower stem of up to 60 cm tall. The bulb is ovoid and large, about 10 cm in diameter, its roots fleshy and thick.

The plant’s hairless, green leaves, soft-textured, broad and stem-clasping, form a ground level rosette. The leaves have entire margins that may be wavy or crinkled and slightly channelled down the centre.

The white, yellow-green or green flowers grow in a dense, cylindrical raceme upon the sturdy flower stalk that is topped by a tuft of green bracts. These bracts are broad-based and round-tipped, folding in to form deep, short channels, angled up and outwards.

There are from 10 to 125 star-shaped flowers per inflorescence on spreading pedicels, each flower measuring up to 2 cm in diameter. The plant is summer-flowering.

The species is distributed in the open grassland areas of the eastern parts of South Africa, also in southern Africa. The species is decreasing in numbers in its habitat early in the twenty first century, causing some concern for its future, as the plant is sought after and over-harvested (Pooley, 1998; www.plantzafrica.com; www.redlist.sanbi.org).