Home » GENERA D-F » Eriospermum » Eriospermum alcicorne
Back to Category Overview
Total images in all categories: 9,917
Total number of hits on all images: 4,617,029 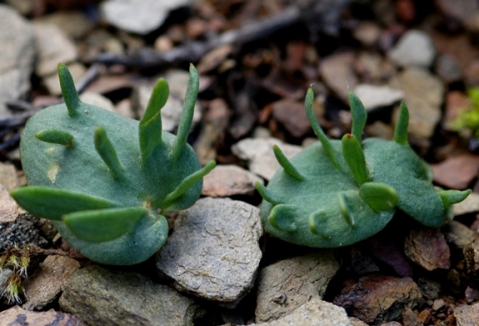 Leaf-like outgrowths in the form of flat secondary appendages, somewhat wart-like and sometimes branched, are present upon the upper surfaces of Eriospermum alcicorne leaves.

Several usually stalked leaves may be grown from one subterranean tuber. Leaf-shape is ovate to cordate (heart-shaped) with rounded tip, lobed base and entire margins. The upper leaf surfaces are glaucous, i.e. blue-green to greyish and sometimes hairy, also on the appendages, although no hairs on the one in picture. The lower leaf surfaces as well as the leaf stalks are reddish, all hidden from sight here. Leaves become about 2 cm long and 1,5 cm wide.

The inflorescence reaches 8 cm, at a time when there are no leaves on the plant. The raceme of white flowers may have a reddish tint, but always a green or dark keel-line on each tepal. The inner whorl of three tepals are borne erectly. The sweetly scented flowers spread to 1 cm in diameter. Flowering happens in late summer and autumn.

The species is distributed in the Western Cape, through the Little Karoo and eastwards to the Langkloof, northwards into the south of the Northern Cape around Nieuwoudtville and the Great Karoo around Richmond and Graaff Reinet in the Eastern Cape.

The plant grows on dry lower slopes in a variety of vegetation types and in clayey or sandy soils. It is not considered to be threatened in habitat early in the twenty first century (Vlok and Schutte-Vlok, 2010; iSpot; JSTOR; www.redlist.sanbi.org).