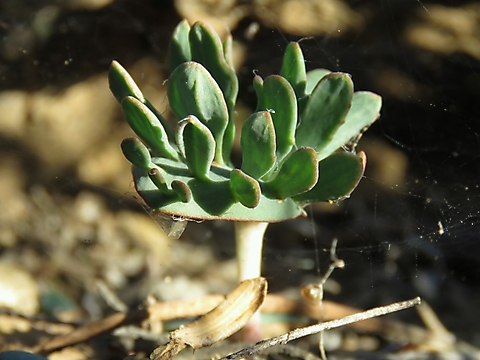 Previous
Image 1 of 14
Next

This Eriospermum alcicorne leaf has grown large secondary leaf appendages, erect on the horizontal blade at the base. They narrow lower down without quite having petioles. Not arranged in precise rows, but face roughly in the same direction like first parade recruits.

The appendages do have a few marginal long hairs, particularly at some of the appendage tips. The hairiness is much augmented by some spider living nearby. Faint red is visible along some margins, again mainly near the tips. The red of the lower surface that may extend into its petiole is not revealed by the photo angle.

The leaf colour is a mix of grey, green and blue, referred to as glaucous. The longish leaf stalk is whitish on this plant (Vlok and Schutte-Vlok, 2015).