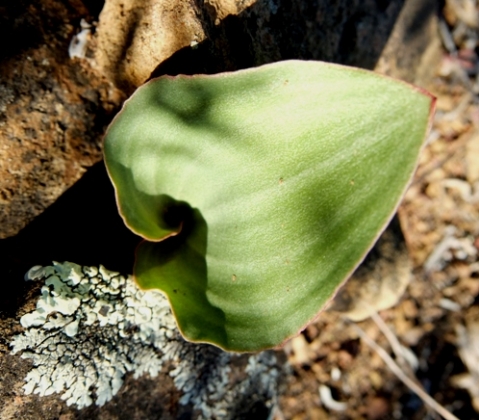 Previous
Image 3 of 14
Next

Eriospermum capense subsp. capense, similar to many of the plants of its genus, flowers when the leaves are dormant.

The tuber of this geophyte annually grows one or more heart-shaped leaves that spread on the ground or stand semi-erectly. The leaf becomes 8 cm long and 6 cm wide, displaying a red margin, a continuation of the red lower leaf surface. Leaf margins may also be hairy.

The summer or autumn flower stem of up to 50 cm is topped by a gangling raceme of tiny white or pale yellow flowers on long stalks.

Vernacular names for this plant include elephant’s ear, which is very ambitious and in Afrikaans bobbejaanoor (baboon ear), which should fit.

The species occurs widespread in the Western, Eastern and Northern Cape, commonly growing on semi-arid, lower slopes of clay ground. This leaf was seen near Oudtshoorn in April (Vlok and Schutte-Vlok, 2010; Bond and Goldblatt, 1984).