Home » GENERA D-F » Eriospermum » Eriospermum paradoxum
Back to Category Overview
Total images in all categories: 8,905
Total number of hits on all images: 3,877,379 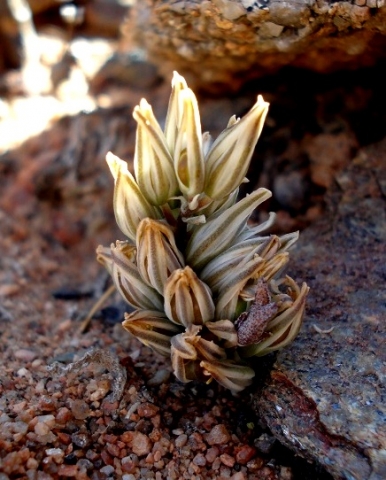 Eriospermum paradoxum is a deciduous geophyte with an oblong, irregularly shaped, fleshy tuber. Above ground it grows one small leaf, 7 mm in length with a feathery green appendage upon the leaf blade.

This plant was photographed in Namaqualand, north-west of Nababeep during April. The distribution is large, extending from Namaqualand south-eastwards to the Karoo, the Little Karoo and into the Eastern Cape as far as Grahamstown.

The family of Eriospermaceae is monogeneric and monocotyledonous, i.e. there is just the one genus of monocot plants in this family. The genus comprises 102 species, all African, with the majority of them growing in south-western South Africa (Smith, et al, 1997; Bond and Goldblatt, 1984; Vlok and Schutte-Vlok, 2010).