Home » GENERA D-F » Eriospermum » Eriospermum paradoxum bloomtime
Back to Category Overview
Total images in all categories: 8,905
Total number of hits on all images: 3,877,678 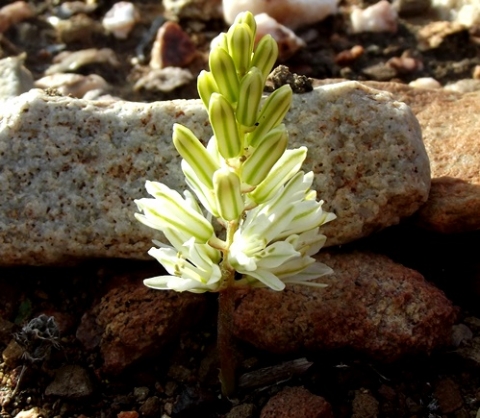 At the peak of Eriospermum paradoxum flowering the about oblong tepals spread just a bit, especially the three in the outer whorl. Flower diameter is about 1,5 cm. Green (or brown) keel lines are conspicuous on the buds at the top of the raceme; on the open flowers more marked on the outside than the inside surfaces of the six tepals.

The flower stalk is erect, streaked and spotted red lower down, pale yellow among the flowers on their short pedicels.

The plant in picture is flowering in solitude among stones of a barren spot in the Little Karoo (Vlok and Schutte-Vlok, 2010).