Home » GENERA D-F » Eriocephalus » Eriocephalus
Back to Category Overview
Total images in all categories: 11,018
Total number of hits on all images: 5,656,447 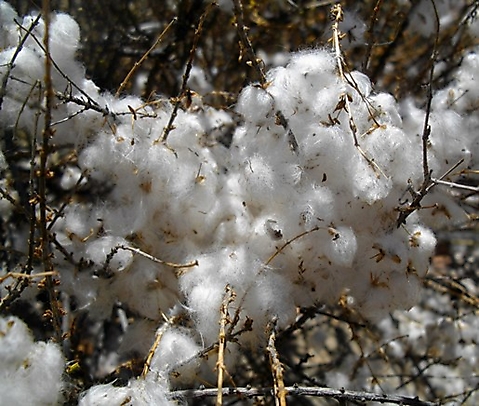 Eriocephalus is an Asteraceae genus of evergreen, many-stemmed, sometimes much-branched or spinescent shrubs. They are erect or spreading, mostly aromatic and hairy or not. The 32 Eriocephalus species are all endemic to southern Africa.

The mostly opposite leaves are ericoid and entire or deeply pinnate comprising up to seven lobes. There are often pitted glands on the leaves.

The rounded involucre at the base of the flowerhead comprises a single row of four to six bracts, hairy or not, often broad-margined. The small flowerheads are stalked or sessile, with or without ray florets. The few ray florets are flat or pleated, spreading floral blades with lobed or toothed margins. These rays are female, coloured white, sometimes pink, red or even yellow, or in those species where they are absent, the outer disc florets of the head or capitulum are female. The disc florets in the centre are male, tubular and five-lobed.

Flowering is rain-related, separating the flowering time of species growing in the winter and summer rainfall regions.

The fruits grow a covering of white wool as in the photo, resembling tiny cotton balls. Eriocephalus plants are commonly known in Afrikaans as kapokbos (snow bush) on account of these white, woolly fruits. The generic name conveys the same: Eriocephalus is derived from the Greek words erion meaning wool and kephale meaning head.

The woolly fruits come in handy to birds lining their nests. They thus disperse the seeds, which explains the evolution of this wool.

Essential oils are obtained from the leaves of several species, some for medicinal use, like Cape chamomile distilled from Eriocephalus punctulatus.

Many species are palatable to game and stock. It is said that Karoo lamb is flavoured by kapokbos and other shrubs.

The plant in picture is E. ericoides, seen fruiting west of Oudtshoorn in dry January conditions. Its flowers were present during winter and spring (Leistner, (Ed.), 2000; Vlok and Schutte-Vlok, 2015; Andrew, 2017; http://pza.sanbi.org).