Home » GENERA D-F » Eriocephalus » Eriocephalus capitellatus
Back to Category Overview
Total images in all categories: 8,952
Total number of hits on all images: 3,966,689 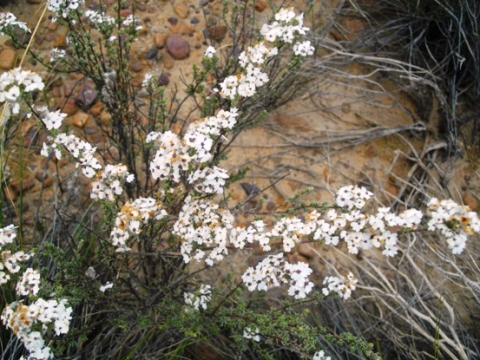 Eriocephalus capitellatus is a slender, sparsely branched shrub usually reaching 1,5 m in height. It grows from a single stem, not resprouting after fire.

Flowering profusely on its upper branches here at Kagga Kamma in September, the plants are found from the Cederberg in the Western Cape to the Baviaanskloof in the Eastern Cape.

The habitat is dry, rocky slopes where the plants grow in sandy soil. E. capitellatus is not considered to be threatened in its habitat early in the twenty first century (Vlok and Schutte-Vlok, 2010; Bond and Goldblatt, 1984; iSpot; www.redlist.sanbi.org).