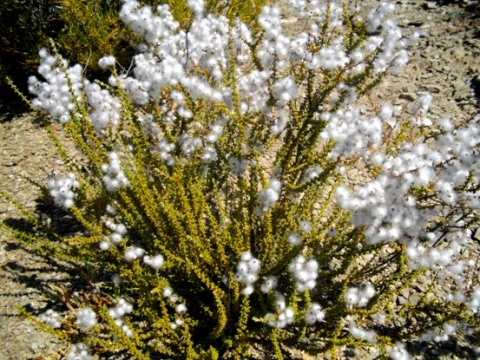 Eriocephalus ericoides subsp. ericoides is a branched evergreen shrub that grows to 1 m. It does not sprout after fires. The young leaves are woolly, old ones hairless. Leaves are small, clustered densely along the branches. On the plant in photo the leaves are yellowish green, while grey-green forms are also found.

The plant grows in clay and sandy soils on flats and slopes. The distribution is large, lying in the semi-arid parts of the Karoo and from the Eastern Cape and the Free State to Namaqualand and Namibia. The photo was taken near Barrydale in October.

The other subspecies, E. ericoides subsp. griquensis, only occurs in the Northern Cape and north of the Gariep as far as Botswana and Namibia (Vlok and Schutte-Vlok, 2010; www.plantzafrica.com).