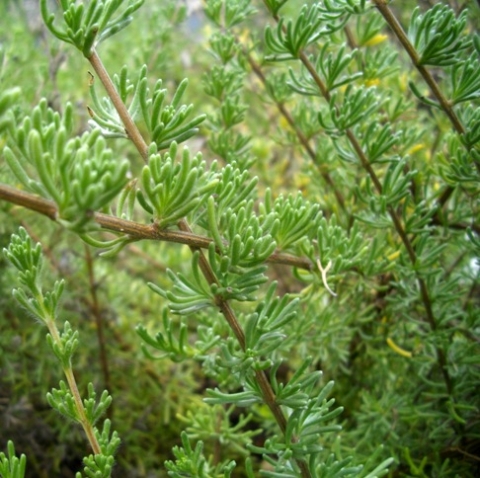 Previous
Image 6 of 20
Next

The leaves of Eriocephalus africanus subsp. africanus normally give the shrub its silvery grey appearance. The grey-green, finely hairy and needle-like leaves grow in tufts along the stems. The leaves exude a pungent smell when crushed.

This cultivated plant growing mainly in shade looks much greener than habitat specimens that cope with variable to low rainfall in full sun. The photo was taken in the Botanical Garden of the University of Stellenbosch.

E. africanus var. africanus has slightly succulent leaves and is a coastal plant of Namaqualand, the Western and Eastern Cape provinces. Inland grows the other kind, E. africanus var. paniculatus. It has a more erect growth habit and thinner leaves that lack succulence, adapted to the arid south-western regions of the country (www.plantzafrica.com; www.toptropicals.com).