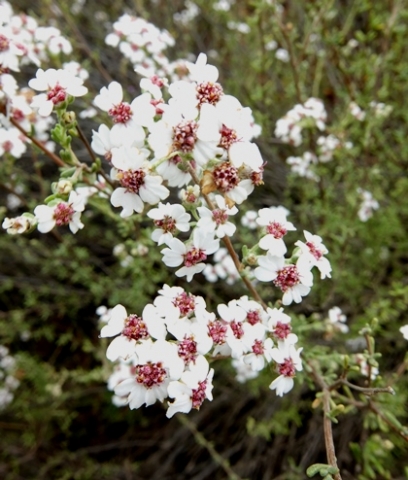 The flowerheads of Eriocephalus africanus var. africanus have mauve to purple disc floret centres; that colouring has not been lost yet from the flowerheads photographed. The white ray florets, the female ones that surround the male disc florets, may also be pinkish on some plants rather than white.

The species is not considered to be threatened in its habitat early in the twenty first century.

This plant was photographed in the Bo-Kouga during April.

The plant is sometimes commonly called gwaiing, a name that must be inherited from one of the indigenous population groups, its meaning now presumably lost (Vlok and Schutte-Vlok, 2010; iSpot; www.redlist.sanbi.org).