Home » GENERA D-F » Drosanthemum » Drosanthemum lique
Back to Category Overview
Total images in all categories: 8,953
Total number of hits on all images: 3,968,097 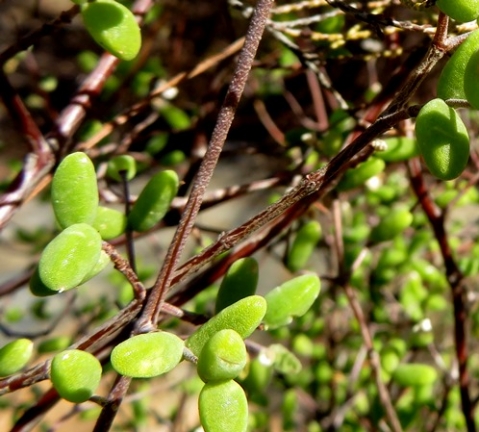 Drosanthemum lique, commonly known in Afrikaans as the doublaarvygie (dew leaf mesemb), is a branched shrub growing into a spreading, mounded shape up to 1 m tall but more commonly 40 cm.

The species is distributed throughout the Little Karoo and parts of the arid inland Eastern Cape beyond the Baviaanskloof, as far as Cradock and Uitenhage. The plants grow among various vegetation types. It is not considered to be threatened in its habitat early in the twenty first century (Vlok and Schutte-Vlok, 2010; Bond and Goldblatt, 1984; www.redlist.sanbi.org).