Home » GENERA D-F » Drosanthemum » Drosanthemum lique leaves and fruit capsule
Back to Category Overview
Total images in all categories: 8,965
Total number of hits on all images: 3,975,987 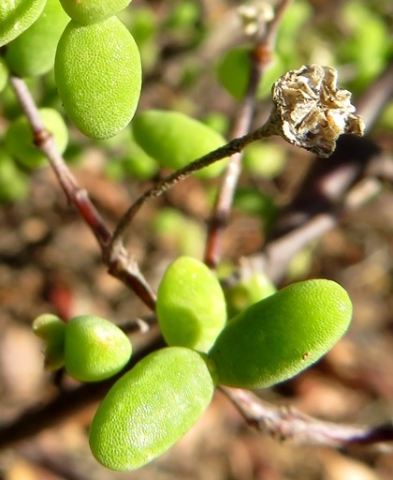 The opposite, stalkless leaves of Drosanthemum lique are barrel-shaped to cylindrical, pale or dull green to yellowish green and rough-surfaced from a dense covering of minute, darker green bulges. The leaves, well rounded at base and tip, become up to 1 cm long.

The pale to dark pinkish purple flowers often grow solitary, but several may sometimes be found near a stem tip. The small and narrow petals spread widely, a purplish cone of stamens and probably staminodes erect in the flower centre. The staminodes, growing among or around the normal stamens and occurring in some Drosanthemum species (as well as in other Aizoaceae genera), are filaments lacking anthers, therefore sterile. Flowers become about 1 cm in diameter, appearing mainly from mid-spring to summer after rain.

In the photo, taken during April when blooming for the season was done, a solitary fruit capsule on a long stalk shows its five locules. Drosanthemum covering membranes on the generally short-lived fruits are straight, the valves equipped with broad wings (Vlok and Schutte-Vlok, 2010; Bond and Goldblatt, 1984).